Home Fun Hide the Pain Harold: Who is he?
Fun

Hide the Pain Harold: Who is he?

In the past decade, technology has made remarkable progress. Many geniuses have given us creative new items such as a touch screen mobile phone, applications on these phones, now the world, in the smallest device you can hold by one hand without putting any or very little strain on it.

As the internet became common in every household, the concept of meme took birth. It is any content that is humorous and gets viral by people on the internet, sometimes after some variations in it.

Over the past few years, many people have become part of the meme game. The meme usually consists of a picture used to describe the feelings of the creator. It could be their opinion/feelings regarding something or a situation in a humorous way.

Andras Arato is commonly known as "Hide the Pain Harold"

Andras Arato is a Hungarian electrical engineer who became a meme after certain events unfolded that led to him known as the "Hide the Pain Harold". Arato was born in Kőszeg, a town in Vas county in Hungary, on July 11, 1945. In 1969, he graduated as an electrical engineer from the Budapest University of Technology and Economics and worked as one for several years. After he retired, he took up the job of a DJ at a local radio station. He is married to a woman named Gabriella and has a son with her. The family lives in the capital and famous city of Hungary that is Budapest.

When Arato went on vacation in Turkey, he uploaded some pictures of himself on the internet. He wanted his family and friends to see how much fun he is having. Little did he know at that time that his picture would come to notice of a photographer who offered him a modeling opportunity. Arato accepted the invitation made by that photographer to capture amazing photos of him. It opened the doors of countless opportunities for him in the future. 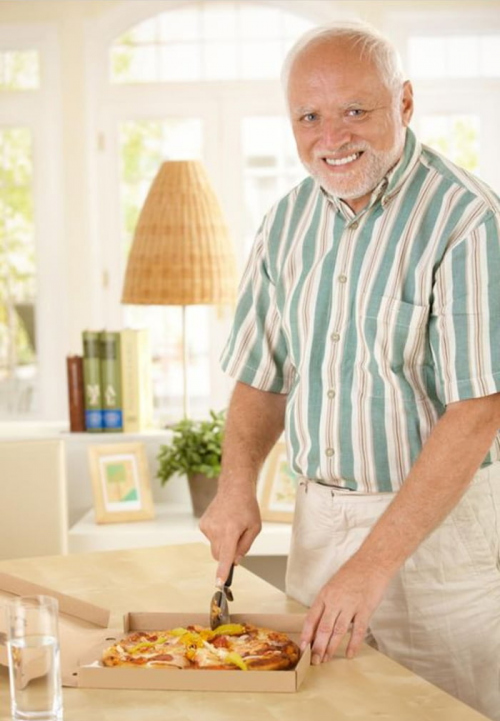 One of his photos as a model

After working as a model for the photographer who found him online, he got many other invitations to shoot him, and he accepted them that led to many stock photos created of him. If you do not know what stock photographs are and no, they have nothing to do with stocks. These are photographs shot for a specific reason. For example, a model getting photographed for a brand's packing. 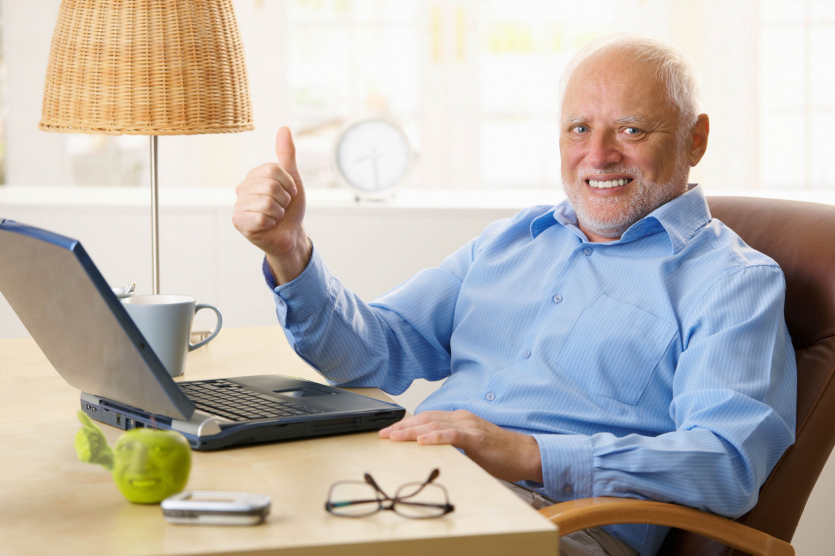 After his stock pictures got famous, Arato googled himself and found his photo to portray a doctor. Though he allowed his stock photos to be used, he placed one condition. 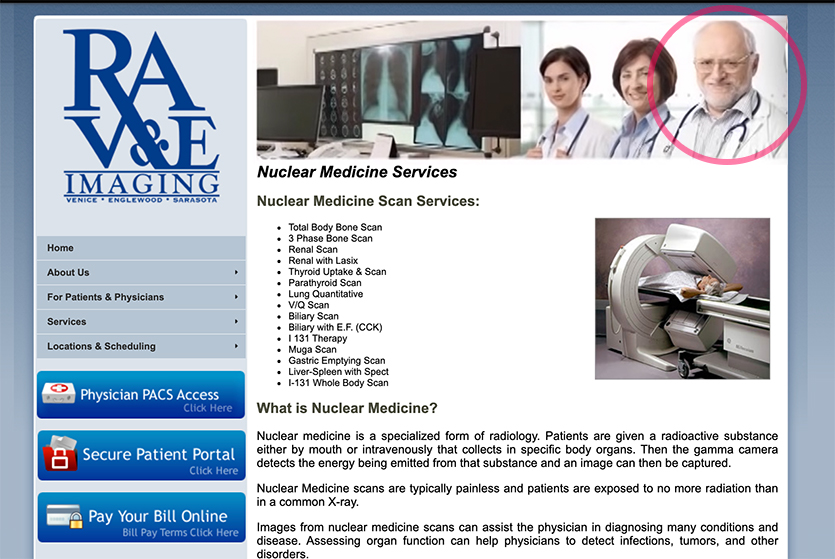 He requested that his pictures not be used on topics involving politics, religion, and sex. Because in his opinion these topics were sensitive for people. Therefore he put this condition up as he didn't want to get associated with anything that could hurt someone. 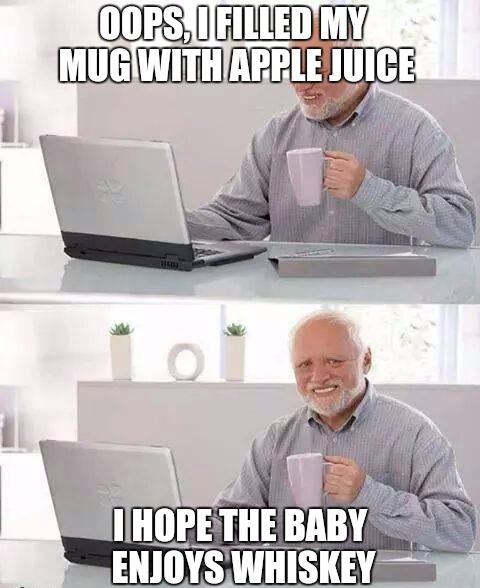 A few months after he had looked himself up on Google, he did it again. Only this time, he encountered was not something he had anticipated, and it upset him. He came across a post with his face on it and funny text (which is now commonly known as "meme") written on it. In his defense, he said that he did not believe that he was a funny guy and did not understand his picture used in this context.

He thought of shutting down the webpage that had circulated the meme with his photo. However, he quickly decided that it would be of no use and that those memes would resurface from another webpage. It took him quite some time to accept what happened with his photo.

People were ambiguous whether the man on the meme "hide the pain Harold" was a real person or not. Some even claimed him to be a computer-generated face. It was because Arato had not revealed his identity yet. He believed that people would forget his face in some time, and he would go back to his life just like he lived earlier. However, fate had other plans.

Memes using his photograph first became popular in the United States of America, after which it spread across Europe and the rest of the world. He was sure that one day, "meme makers" would get bored of his picture. But this never happened!

He never planned to tell the world who he was until an internet user found out who he was and had the courage to email him. He did not take much notice of it at first, but soon plenty of more emails started flooding his inbox, requesting him to come out about his identity. After that, he decided that it was time for the world to see who the real man behind that meme was.

Arato picked up a sign saying "I am alive" in Russian and took a photo with it. It was then uploaded on one of his Russian fan pages, revealing to the internet world that he was a real person with a life and career. He did not plan to go in this direction. Within a short time, many people had seen that photo, and Arato aka hide the pain Harold was the talk of the world. 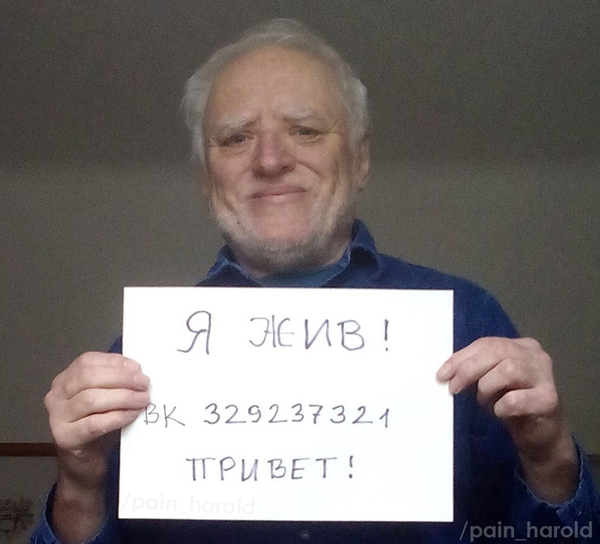 Aftermath of the reveal and title

Few hours after posting the photo, ten thousand people had seen it, and it also came under the notice of international media. Overnight he became an even bigger celebrity than he already was. His photo was requested by many. The photographer who had noticed him at first, and due to which he became so famous, took some more pictures of him.

In those photos, people passed comments regarding Arato’s smile as fake. But this mystery was later resolved by Arato. He disclosed that he had become tired of smiling at that time. It was no surprise as he had, by now, taken uncountable pictures for different purposes, and he no longer felt like he could bring out a genuine smile.

That photo is what got him the title of “hide the pain Harold” as he looked like a man who was in sorrow trying to hide it with a fake smile.

In 2019, Arato became the face of advertisements for Coca-Cola in his home country, Hungary. Many brands pay famous people to become the face of their brand that helps them increase their sales. It happens because famous people have fans, and some even worship them. This inspiration from the star leads to them buying products that are associated with those people.

Arato's face, no doubt, led to higher sales for many companies. People were happy seeing their favorite meme man's face (loved by millions of people) in an advertisement holding a soft drink.

Some YouTube channels covered his story too briefly, explaining his experience in the past years and how he accepted that he had become a meme and was a source of entertainment for many people.

A YouTube channel called "60 seconds" that is famous for showing videos of 1 minute=60 second. According to its name showed a small in 2019 of how Arato felt about whatever had happened in the past and how he became famous. Arato talks about pain and how everyone has it, and we are all hiding behind smiles, some smiles showing pain while others doing a great job masking the pain. 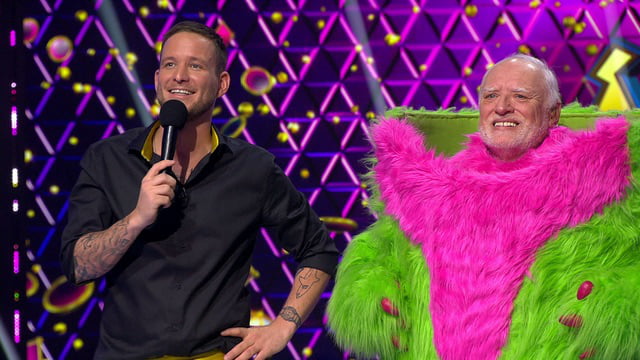 Arato was the monster in “Masked Singer” / 9GAG

In 2020, Arato was part of a Hungarian version of a reality singing contest named “Masked Singer” broadcasted on the TV station RTL Klub. BuzzFeed, a famous YouTube channel, had also made a video on Arato. The video had Arato telling his story of how he was found by this professional photographer. How he never thought accepting that offer would change his life drastically in ways he had never imagined.

What Arato has to say about his success?

As mentioned above, Arato was not very delighted when he found out his picture was being used as a meme that people would laugh on. He did not understand what him being a meme would mean and believe that he was a serious-looking man who could not make people laugh when they looked at his picture.

He had given a thought to bringing down those meme posts. However, as any wise man would do, he did not carry on with his plan because he understood how the internet worked. Even if he took that web page down, there would be people who would somehow have access to his photo and continue to use them.

It was challenging for him to accept how things were. It is clear from the fact that it took him six long years to finally just let it go, and accept that some things are just out of your control. He realized that it was best not to stress over them.

From ancient times humans have divided themselves on the basis of physical appearance and behavioral traits, this discrimination leads to division among people giving superiority to one race or gender over another
601 views

The phrase “Don’t worry, be happy” which was originated in China by the Sui Dynasty much before they migrated to Europe. This phrase then spread rapidly throughout the world and therefore, can be considered a meme
381 views