England, a land of festivities and joys. Like other festivals, this festive landmark is also the host of the musical festival ‘’Isle of Wight’’.  The host of this fabulous event is Newport (a town in England) including the Isle of Wight (county of Virginia). The Isle of Wight is the second most populated island in England. As the name states, this festival also has a pretty interesting history. So, let's have a look at the history of the festival.

This festival was first held in 1968 by Fiery Creations (A company owned by Ron and Ray Foulk) and was crowded with more than 10,000 people. Such an epic response motivated the organizers to keep up the good work and attract more audiences towards it.

In 1969, the people went crazy as their favorite Bob Dylan, the Band, the Who, Joe, Free, and many other famous musicians were performing at the festival. More than 150,000 people participated in the festival at that time and made this a historical event.

Year by Year, the craze of this festival was going above all the limits. In 1970, this day was again organized by Fiery creations at an area on the western side of the Isle of wight known as Afton down. People showed their limitless love for the amazing event again and the estimated number of 600,000-700,000 people were witnessed on the spot. After this event, the parliament was worried about the immense participation of people in the upcoming festival in 1971. Due to this, the parliament added a section to the Isle of wight county act prohibiting the gathering of more than 5000 people on the island without the permission of the county council. 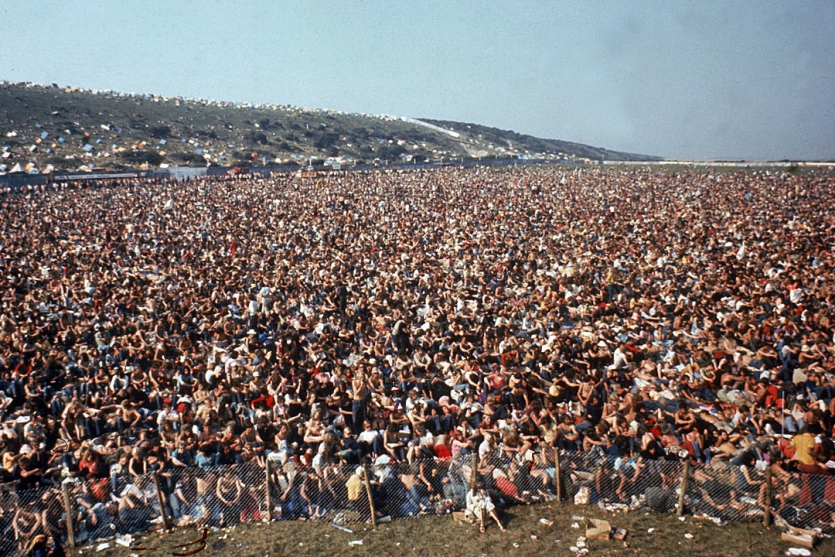 There were many issues that led to the ban of the event. Many people were arrested using/selling drugs and trespassing the entrance, there were long queues outside the bathrooms, the Island became a pile of filth after the festival, a queue of people waiting for their payments behind backstage, and many other reasons. It was assumed that the Island doesn’t have the capacity of handling hundreds and thousands of people at once.

After a long ban of 30 years, this festival was revived in 2002 and after revival, now this festival is organized annually. Since its revival, many famous stars like The Rolling Stones, Amy Winehouse, Muse,

Boy George, Donovan, Travis, Coldplay, The Zombies, The Proclaimers, The Police, Foo, and many other notable names have performed at the festival. The current promoters of this mega event are Solo Promoters Ltd, even Nokia has also sponsored this event from 2004-2006.

These are some highlights of the Isle of Wight Festivals after its revival:

In 2002: A great festivity emerged again on the 3rd of June on Newport in the Isle of wight. Although the response was not that epic but still it was a worthy music show. This one-day show had a capacity of more than 22,000 people but only 10,000-12,000 people participated in this musical event. The Major performance was of a local band “Neglected Youth”. They got this opportunity to begin the concert by winning a talent hunt contest.

In 2003: The second year of revival was also not much promising as only about 14,000 people attended the festival. In this two-day festival, famous artists like Paul Weller, Star Seller, The Thrills, The Burns, and many other music sensations showed off their talent.

In 2004: The third year of revival was the year that genuinely revived the Isle of Wight Festival. Due to the sponsorship of Nokia, the arrangements were far better than previous years and the crowd capacity was increased enormously. These improvements resulted in an epic response from the public as more than 35,000 people attended the festival.  Many stars like The Who, David Bowie, Jet, Proud Mary, and others performed and made the event memorable.

In 2005: The popularity of the festival increased every passing year, and the number of participants increased as always. Approximately 50,000 people enjoyed the amazing performances of Faithless, Razor Light, Travis, R.E.M, and others.

In 2006: This year was a great year as there were many upgradations in on the festival spot like a Bandstand for local Bands. Moreover, a gigantic crowd of more than 55,000 people was there to cheer up artists like The Prodigy, Placebo, Coldplay, Primal Scream, and others.

In 2007: This British festival was attracting a massive audience towards it because of a high standard of arrangements and participation of musical sensations of that time. Moreover, this festival won the title of ‘’Best Major Festival’’ at UK Festival Awards in London.

In 2008: A historic year for the festival as in its 41 years of history, as it was broadcasted live on TV.

It was considered a big success as a large number of audiences participated virtually in the show. The broadcast was a success. ITV was the first channel that got the right to broadcast the festival.

An approximate 55,000 attended the event.

And the story continues…

Time passed and every year this festival became more and more popular.

In 2018, the Isle of Wight witnessed one of its biggest crowds of more than 72,000 since its revival.

Unfortunately, Due to COVID-19 Pandemic, The Isle of Wight festival was canceled in 2020 and now will be held next year from 11-15 June 2021. Everyone is waiting desperately for this music festival.

This Festival has been nominated for many national and international awards and also won many awards like UK festival Awards, Festival Baby Awards, Live Music Business Awards, and others for The Best Festival.

The life we are living today is full of depression and hardships. Almost everyone is busy in the hustle of obtaining a better lifestyle and a more luxurious living hood. In this fight for survival, people have forgotten to enjoy their life. The frustration and stress are leading our society towards aggression and restlessness. Music is the best way to calm your nerves and make you happy. If you are searching for quality music, This Isle of Wight festival is the place for you.

It is a paradise for music lovers as all of his/her favorite music sensation is there for him/her. So, what are you waiting for? Get ready for the next event and book your tickets in advance!