Fans love movie sequels and extending seasons of their favorite shows. However, sometimes, the sequels and subsequent seasons take longer than usual to air. Whether it be the fan’s demands, the director’s part of a long-term plan, endless reasonable delays, or nostalgic cash-grabbing reboots we have seen many sequels and seasons to arrive decades after their preceding production.

It has always been a huge risk to launch production, years later, especially after the peak popularity of a movie or TV-Series. Filmmakers take the risk; sometimes it works, other times, it banks on the nostalgia and earns a profit.

Following are Movies or TV-Series with the largest gaps between productions. 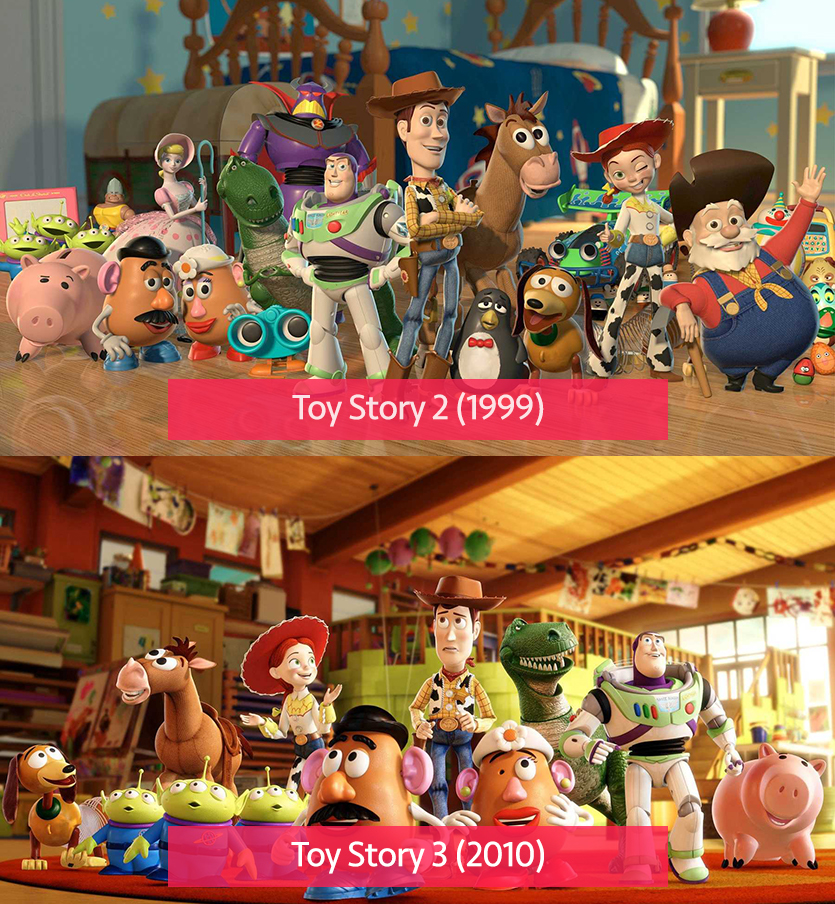 Our favorite animated franchise, Toy Story, also became a victim of the long gap. The franchise was so popular that an eventual third movie would have been an instant hit. However, corporate issues paved the way for the delays with Disney and Pixar at the neck of each other.

The issue was resolved when Disney bought Pixar, and Toy Story 3 was back in development with a new coming-of-age story. As predicted, the franchise made a spectacular comeback with its third movie winning an Oscar and making Toy Story the most profitable franchise in Hollywood history. 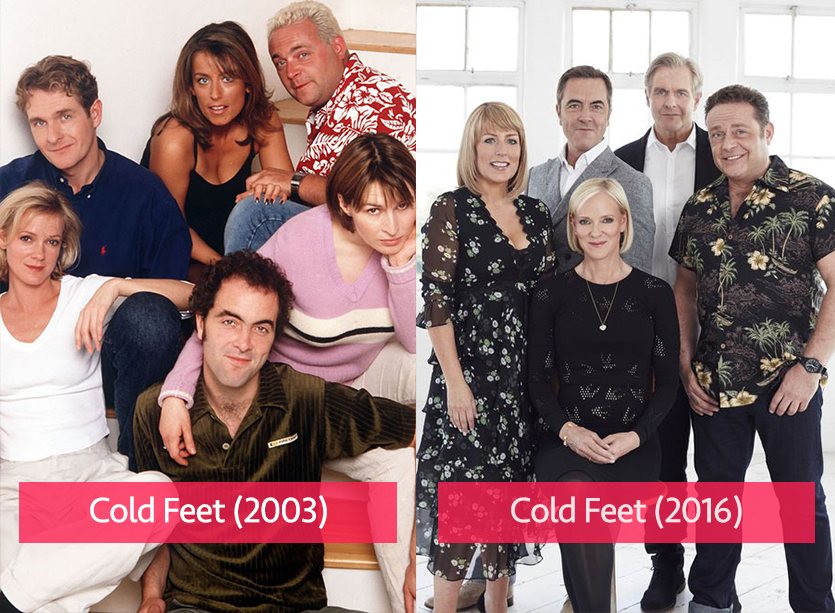 The British comedy-drama series, Cold Feet, returned on-screen in 2016 with its 6th Season after 13 years. The series staged the life of three couples and the ups and downs they faced in their life. The series was an instant hit and grabbed multiple awards in its 5-season run. Internal conflicts surged with the writer uninterested in writing more episodes beyond season 4 as he believed they will be clichéd and dragged. However, with the cast and crew demanding more episodes, he wrote off season 5 ending the show with a climax. It seemed as Cold Feet has ended.

However, with the recent trend of ‘revival cinema,’ the creators bought the show back with the old cast joining the show (minus one) and some new ones as well. Like its predecessor, the show was a success and didn’t seem clichéd. The fresh episodes and new storylines made it popular once again – 13 years later. 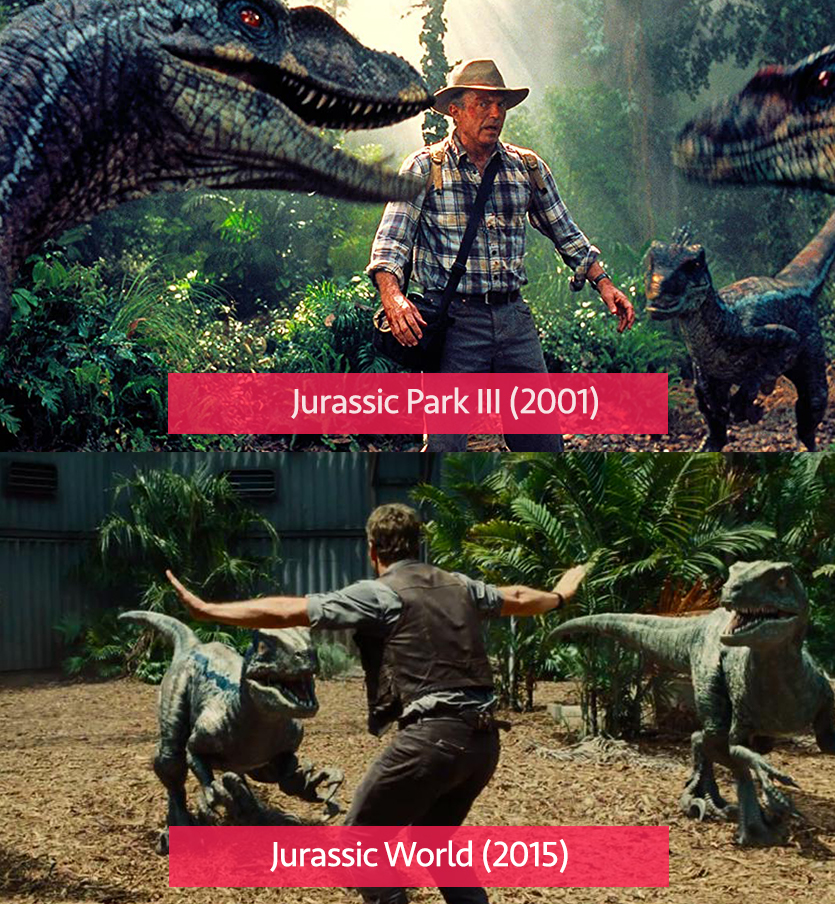 Jurassic Park is one of the highest-grossing franchises with a combined total of $2 million. They were a huge success critically and commercially and is still highly praised by fans. By the end of the third Jurassic Park movie, the director of the first two Steven Spielberg, had already come up with the idea of a fourth Jurassic Park Movie. Things didn’t go well as they seemed. The third movie’s director backed off, several scripts started circulating, the storyline wasn’t up to par, creators got involved in other projects, and the death of an original cast member led them in a completely different direction.

By 2012, things started to progress and a fourth Jurassic Park movie was on its way. Three years later the much waited Jurassic World was released with a record-breaking opening weekend. It acclaimed many awards and ranked up to the third highest-grossing movie of all time. Only Henry Wu was able to reprise his role from the original movie. 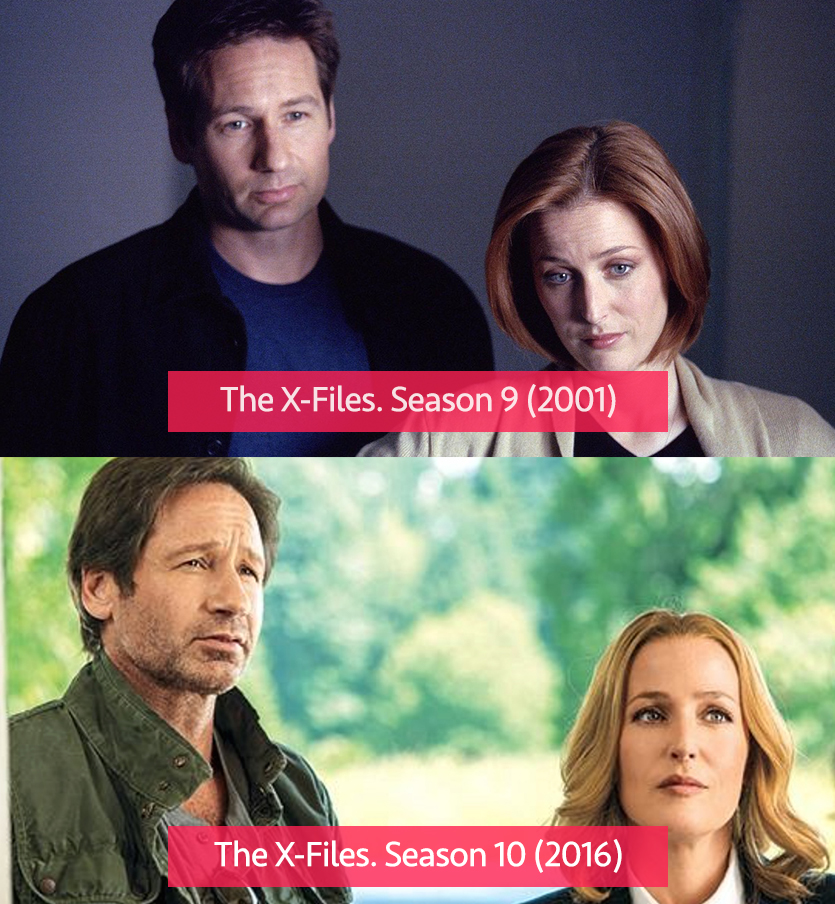 The 10th Season of the famous American Science-Fiction series aired 14 years after its 9th Season (2000-2001). The original series was the channel dominator in the 1990s but the series hyped wore off as the leads lost interest and eventually hopped off the show. The replacement leads didn’t live up to the mark.

FOX, who was still hoping to bring the show back, was successful in assembling the original cast. The 6-episode series smashed records and paved the way to Season 11. 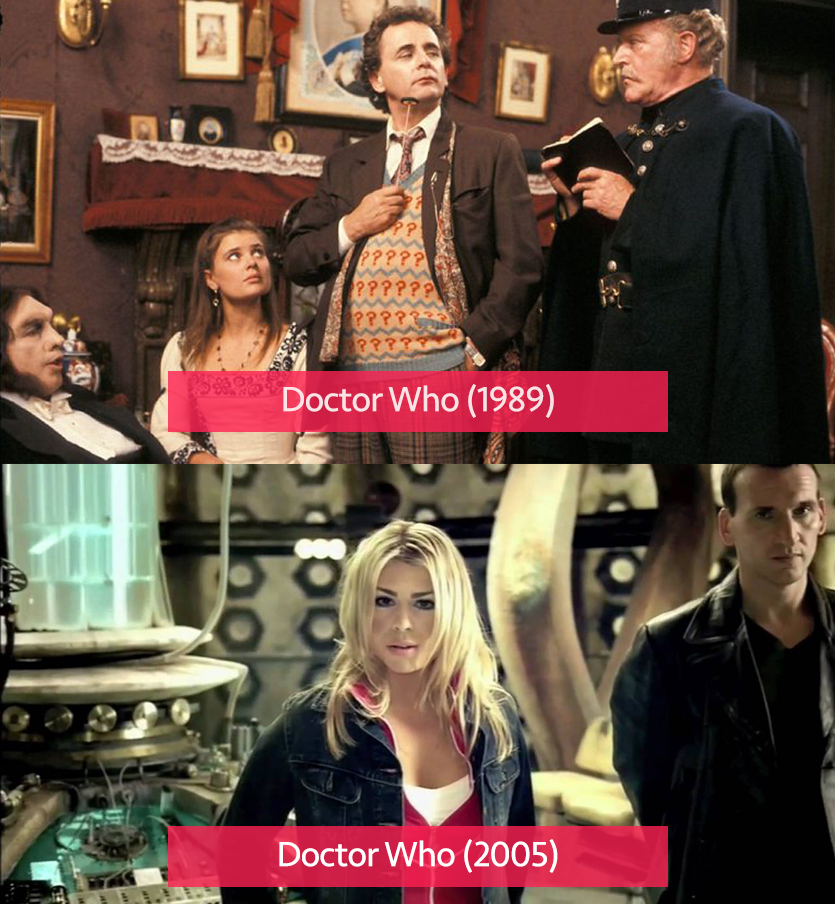 Doctor Who is a famous television series that originally spanned from 1963-1989. It depicts a narrative of Time Lord, an extra-terrestrial being who appears to be a human, called ‘The Doctor’. It became a part of British popular culture and gained fame as a cult classic. With the arrival of Sixth Doctor, Colin Baker, in 1985, the show started losing its charm and lost average viewers per serial. BBC intended to call off the series but the fan’s outrage kept the show alive for a further four years until the Seventh Doctor.

The show left an impact on fans; even after its discontinuation in 1989, fans enjoyed Doctor Who in magazines, books, and audio cassettes. Many attempts were made in the 1990s but they all failed, however, a movie attempt was made but it wasn’t of any good. Doctor Who’s popularity soared in other media and through spin-offs. Eventually, in 2005, the series’ long-term fan, Russel T Davies revived it with new artists and crew and a Ninth Doctor, Christopher Eccleston. The show is still ongoing with a Thirteenth Doctor and female; Jodie Whittaker. 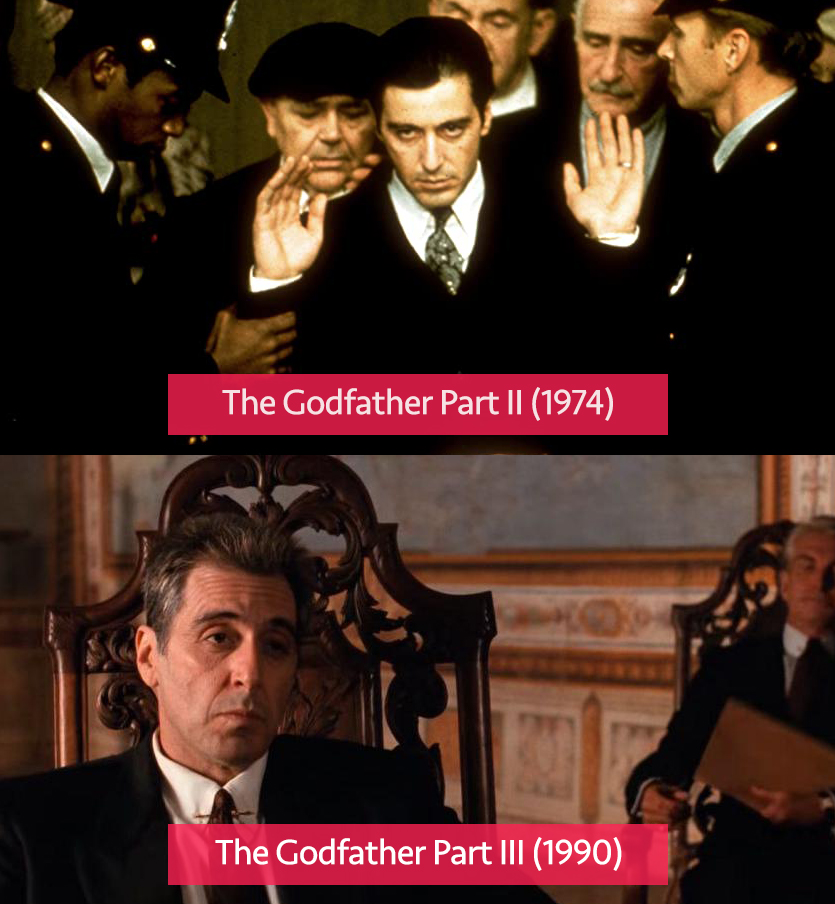 Concluding the story of Michael Corleone, The Godfather Part 3 was released in 1990, 16 years after The Godfather Part 2. The Director, Francis Ford Coppola, saw the second part as the culmination of the series and wasn’t intended to proceed with the third part.

Years later, Coppola found himself in an ominous financial situation due to the major flop of its 1982 movie One From The Heart. He was compelled to take Paramount’s offer of Godfather 3 as the continuation of the series instead of an epilogue. The Godfather Part 3 was successful enough to grab a nomination at the Oscars. Nevertheless, the fans and critics were disappointed with it not being up-to-par as of the first two movies; they supported the director’s initial vision of Godfather 2 being the end. 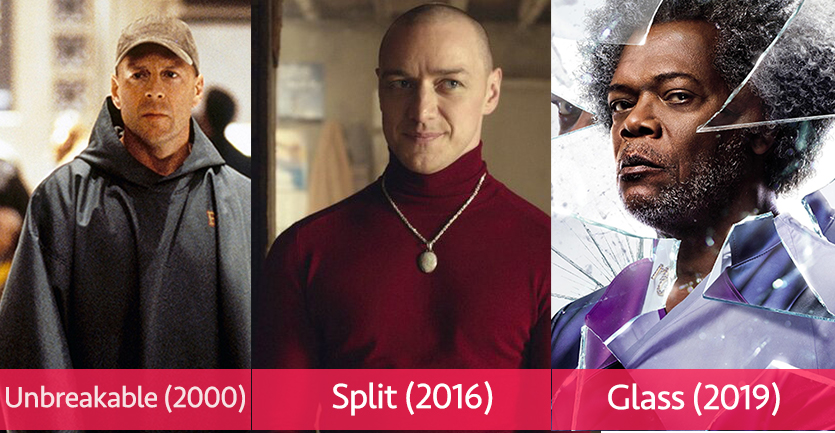 The superhero thriller and psychological horror film series, Unbreakable Trilogy, continued after a gap of 16 years with the sequel Split. Director Night Shyamalan initially intended to proceed with the trilogy but the negative reception of Unbreakable backed him out.

Through these years, Unbreakable’s popularity morphed and comic-based movies were gaining success. Therefore, Shyamalan, taking the opportunity, completed the trilogy with 2 fantastic sequels. 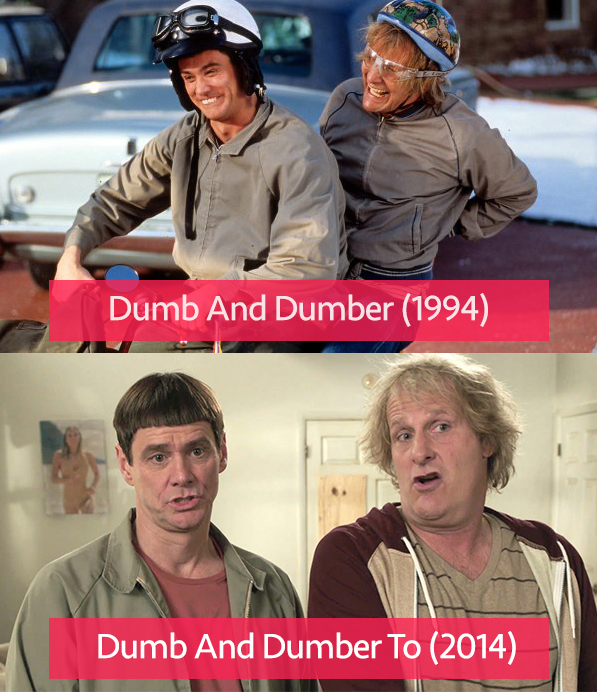 Dumb and Dumber, a 1994 American comedy film, was a success in its time. It grossed around $247 million ($420 million adjusted to inflation) and established the career of lead actors, Jim Carrey, and Jeff Daniels.

In recent years, rumors spread about a sequel to the 1994 cult classic and by 2012 the script and cast were confirmed. The franchise sequel performed badly at the box office gaining negative reviews from fans and critics. It grossed around $169.8 million which is considerably less than what its predecessor earned – not even adjusted to inflation. The critics say that the sequel was certainly not asked for and was a nostalgic, cash-grabbing production by the creators. 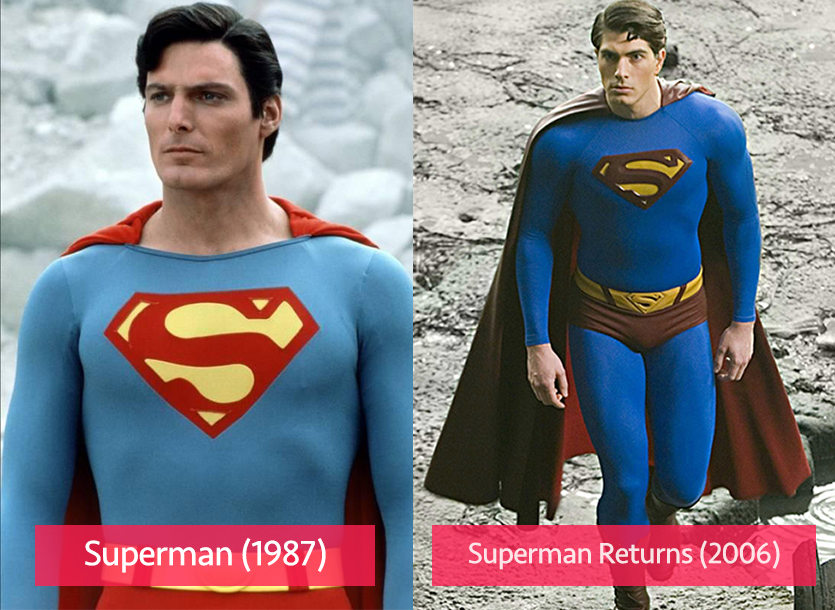 It’s a bird, It’s a plane, It’s … Superman – back on-screen after 26 years. Superman Returns serves as a homage sequel to Christopher Reeve’s Superman Series that ran from 1978-1987. The Superman series produced by Ilya and Alexander Salkind is considered the best Superman Series of all time. The portrayal of Christopher Reeve as Superman is ranked as the best in superhero films. The first two Superman movies were well received and gained enormous success critically and commercially. However, the other two movies were not up to par leading to the series' discontinuation.

There were several attempts to reboot the series in the 1990s and early 2000s but they all failed. However, Bryan Singer was approached by Warner Bros to direct the new film. Brandon Routh was cast as the new Superman and the narrative ignored the events of flopped Superman 3 and 4. Despite the hefty return, Superman Returns received mixed reviews but Routh’s portrayal was appreciated. 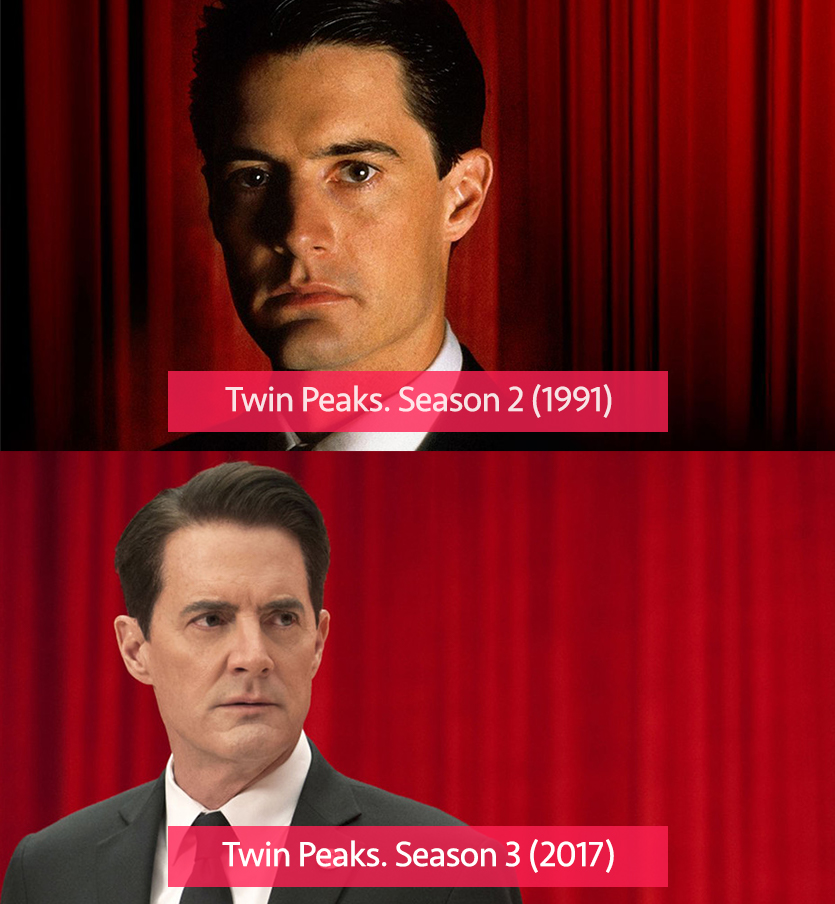 The American mystery horror drama series made a comeback in 2017, 26 years later, after getting canceled in 1991. The declining ratings of the show got it canceled. Although the creators made a prequel movie that didn’t work well, they stated that Twin Peaks is “as dead as a doornail”.

Fast Forward to 2007 producer Robert Engels and artist Matt Haley started working on the continuation as a graphic novel. However, the storyline bought back the creators; they created the 18 episodic third season of the famous series. Most of the main cast was rehired along with additional artists for the third season. 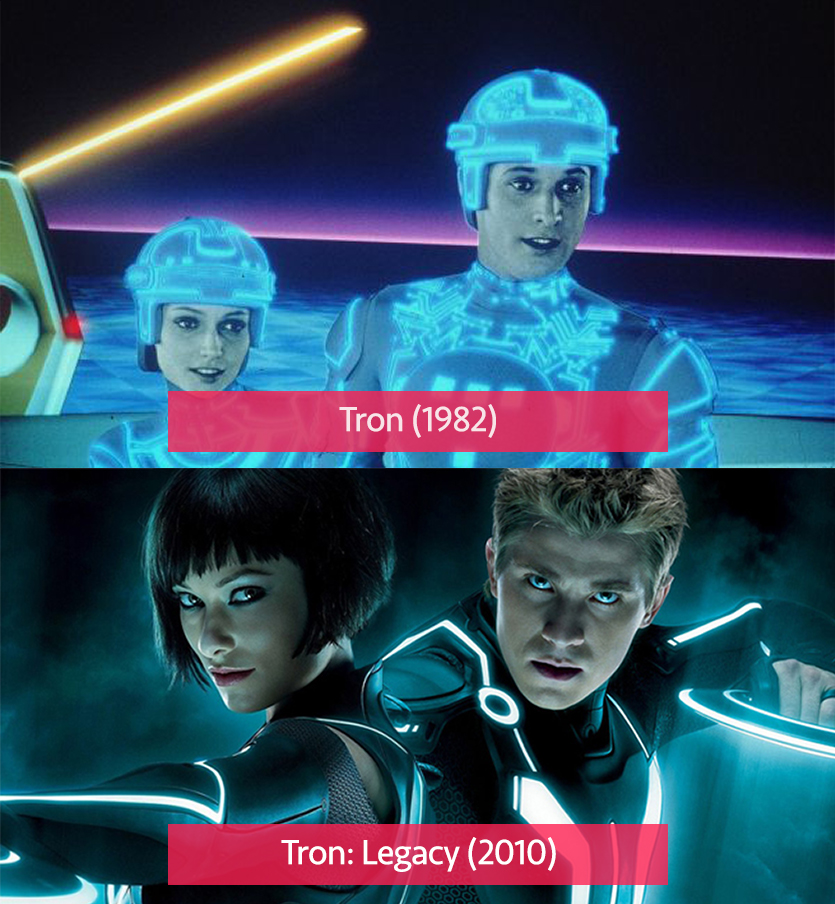 The American sci-fi action film, Tron, landed after 28 years with its sequel Tron: Legacy. The 1982 movie was amongst the early Hollywood productions that involved computer-animated graphics. However, it earned not as per the expectations of Disney Studio; therefore, a possible sequel was not looked forward to.

Over time, the movie gained the status of a cult classic, and the rumors of a possible sequel brewed over the years. The sequel stepped into development in 2005 and was released in 2010. Like its predecessor, it didn’t gain that much success which canceled the possibility of a further sequel; Tron was closed for final as a cult classic. 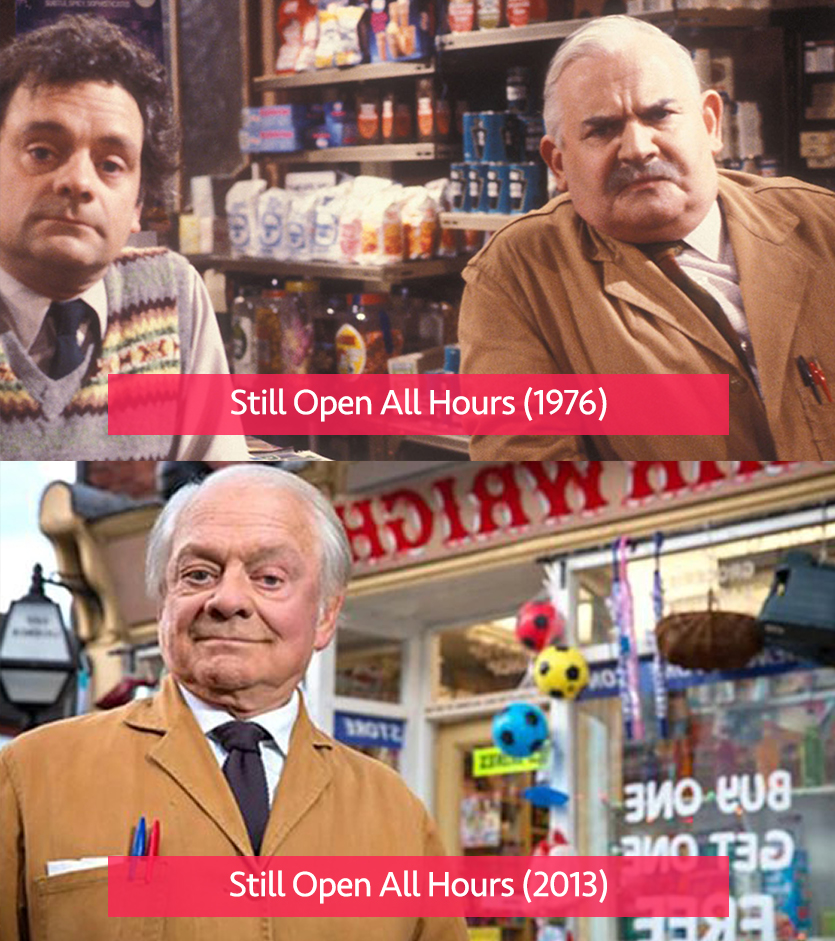 The British Television Sitcom, Open All Hours, ran from 1976 – 1985 in four series, 26 episodic runs. It was one of the famous comedic sitcoms of its time with Ronnie Barker and David Jason in the lead.

28 years later, creator Clarke wrote a one-off episode for the show’s 40th anniversary. With Ronnie Barker’s death in 2005, David Jason became the main lead with the new arrival James Baxter. A day after, the 30-minute documentary was also aired on BBC-One on the show’s return. BBC renewed the series, seeing its resurgence, for six new episodes that were to be aired in 2014. 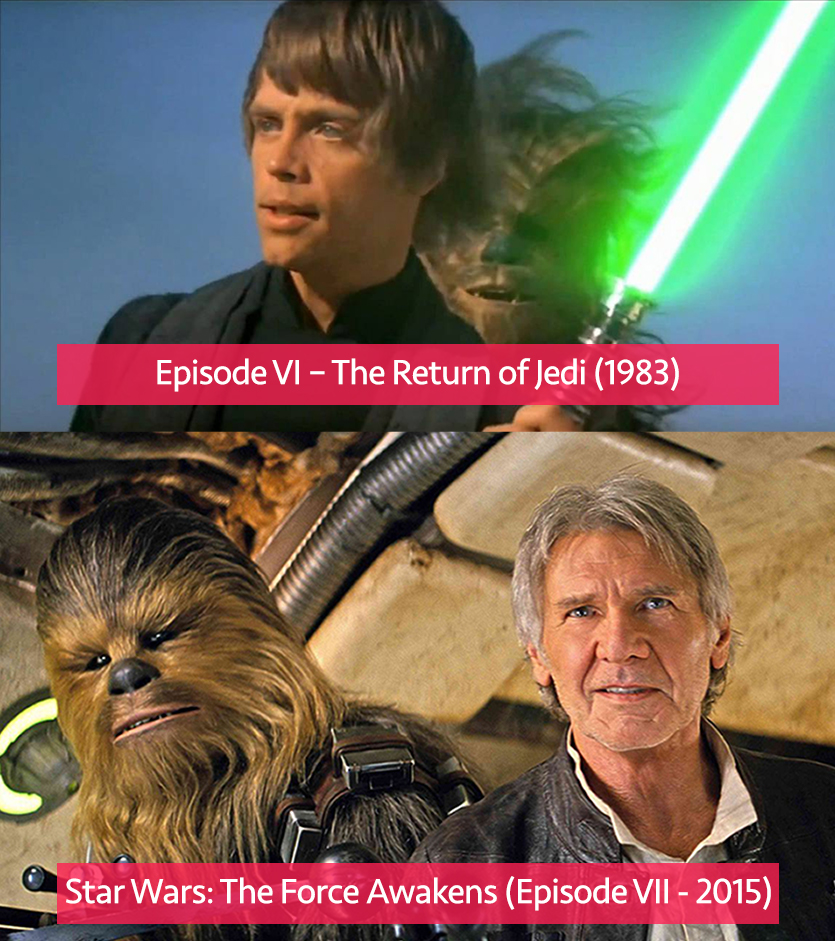 The gap between movies depends upon how you see the Star Wars chronology – release wise or timeline-wise. According to the release pattern, The Force Awakens came out after 10 years, succeeding Episode III - Revenge of the Sith (2005), a prequel of original Star Wars. According to the timeline, The Force Awakens released after 32 years considering to be the direct successor of Episode VI – The Return of Jedi (1983).

The Original Star Wars trilogy was a huge success and gained many awards. The creators saw that they can explore more led them to create a prequel series. The prequel series was not that successful as the original trilogy. Still, it added fire to the rising popularity of the Star Wars saga. The creator George Lucas wasn’t interested in expanding the series further stating that he believed Star Wars had a perfect closure with Anakin and Luke Skywalker’s stories.

When Star Wars was sold to Disney in 2012, they saw momentum in its narrative and monetary potentials for the film. They immediately started working on the sequel trilogy and released the Force Awakens in 2015. The original trilogy lead characters reprised their roles with new artists joining the crew. The film was a huge success. It bought back the original trilogy fans who wanted to know more about Luke Skywalker, Han Solo, and Princess Leia. 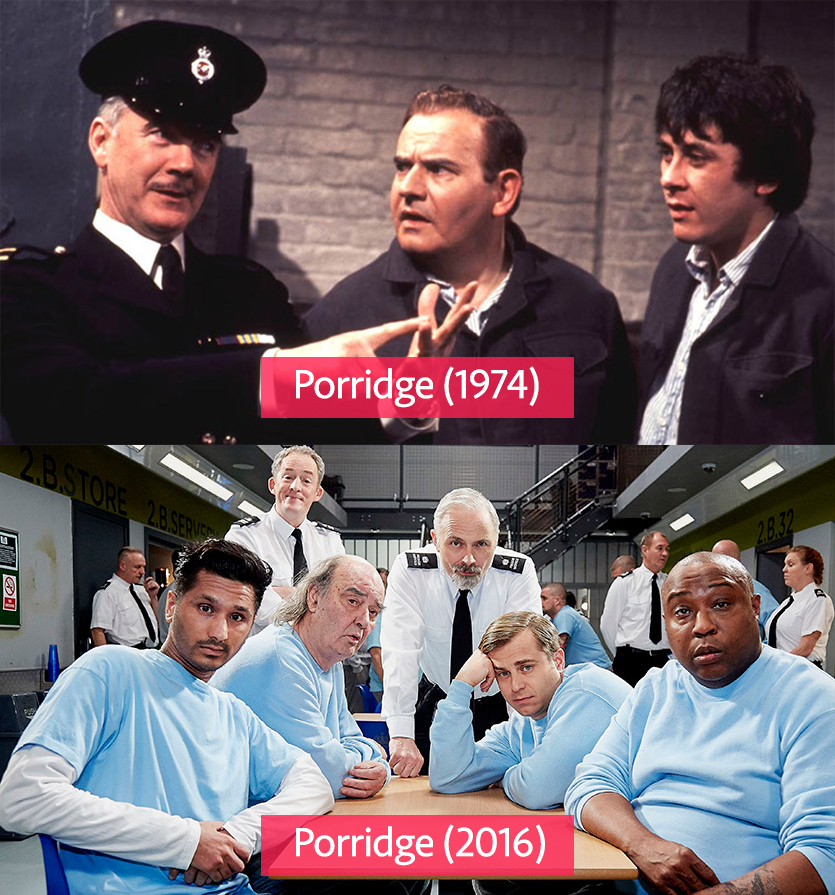 Porridge is a BBC1 British Sitcom that involved the late Ronnie Barker. It is a story about two inmates who are serving their time at a fictional prison. Porridge was critically acclaimed and is considered to be one of the best British sitcoms of all time. The series ran for 3 seasons and 21 episodes. The creators wanted to develop more but Barker backed off considering he must move on and try other projects.

42 Years later, BBC1 developed a one-off sequel episode as a part of BBC’s "Landmark Sitcom Season". The episode was well-received that urged BBC to proceed with a sequel series. Porridge (2016) is about Barker’s character’s grandson and his nitty-gritty.

So which franchise sequel did you await the most?

From ancient times humans have divided themselves on the basis of physical appearance and behavioral traits, this discrimination leads to division among people giving superiority to one race or gender over another
561 views

If today's songs were written in the 19th century, would it have been possible to gain the same fame today? Today we have various mediums like social media, print media, electronic media, musical shows, etc. to release songs
211 views