A new ear of human history has been unleashed through the lift-off of a small helicopter, named Ingenuity, on the Martian surface. This event marks human's first official vehicular flight on a planet other than earth. Standing at 19 inches in height, Ingenuity flew to a height of around 10 feet from surface level. The chopper hovered for a few seconds, blowing away red dust all around it, and then descended back to the ground. Although the length of the flight may not seem impressive at first glance, it marks one of the most important moments in contemporary engineering.

Even most people in NASA itself did not think that it was possible at all for the flight to be successful given the lack of air on Mar's surface, according to MiMi Aung, Ingenuity's project manager at NASA's Jet Propulsion Laboratory (JPL).

Mar's inhospitable atmosphere is the equivalent to an altitude of over 100,000 feet on Earth, which is a level that is inaccessible for the most advanced and capable helicopters on the planet. The highest helicopter flight on Earth was made by Jean Boulet, a French aviator, who flew a helicopter to a height of 40,820 feet near the French coastal city of Marseille.

During this impressive journey, Ingenuity suffered from its first debacle on the 9th of April 2021 when during a rotor spin test, its onboard computer shut down completely. Upon conducting a thorough examination of the data, the team at NASA's JPL concluded that the command sequence sent to the helicopter's rotors, instructing them to initiate, had to be adjusted. Through these efforts, Ingenuity experiences its first successful flight on April 19th, 2021 around the mid-afternoon in Martian time - 3:34 a.m. ET.

It is now expected that within the near future, several similar new crafts can be launched to the planet to conduct reconnaissance and collect samples of dirt and minerals from geographically challenging areas. These crafts can fly many tens of miles in only a few days, so they can also be very useful for obtaining additional information on the Martian landscape such as features on its surface, the presence of different minerals, etc.

Weighing in at only four pounds by Earth weight, and 1.5 pounds on Mars since the gravity is much weaker there, Ingenuity has been fully operational since the 3rd of April 2021. That day the rover Perseverance deposited Ingenuity on a piece of flat terrain ideal for launching a helicopter. A solar panel was utilized for changing Ingenuity's batteries, and during the Martian night when temperatures can go as low as -130°F electric heaters were used to keep the helicopter warm and operational.

Before the flight, Perseverance took a selfie on the Martian surface with Ingenuity on the 6th of April. After that, Perseverance then drives away to a distance of 200 feet to observe Ingenuity's flight. 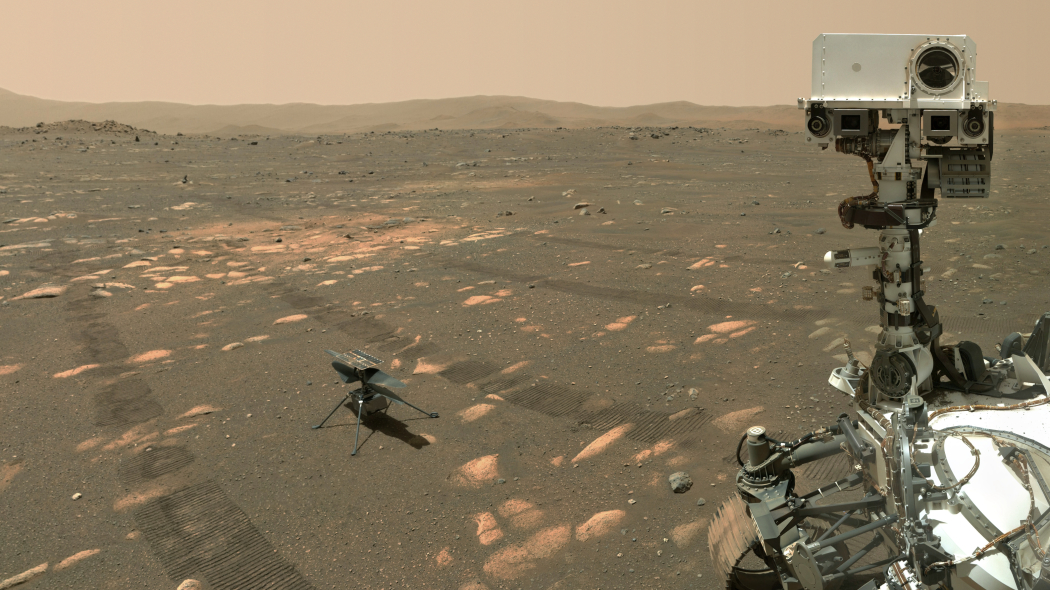 Ingenuity utilized a small onboard processor, similar to those in other smart technologies such as self-driving cars and smartphones. These processors are ideal for assuming control of an object remotely, and they can be used effectively for providing complex instructions.

After the completion of Ingenuity's first flight, it's possible for NASA to now planning a second flight that would involve a second hovering maneuver, but it is expected that it would be much longer and at a far higher altitude than the previous one. Currently, NASA is halfway done through a 30-day test window. Perseverance continues to serve as a communication link between the helicopter on Mars and NASA's team on earth until the rover is scheduled to begin its exploration of the Martian surface in the interest of finding traces of life. A total of five flights are planned for Ingenuity.

NASA's associate administrator for science, Thomas Zurbuchen, has stated that it simply boggles the mind that the first flight of an earth-made vehicle has been made on Mars. He also expressed sentiments that this development proves that nothing is truly impossible in the world of engineering.

In the year 2015, NASA's Mars helicopter team made their first presentation to the company for securing funding for the construction of a prototype vehicle that could be launched into the Martian surface. As part of their tests, the team flew a model aircraft in a vacuum chamber that had been pumped to low pressure and contained large volumes of carbon dioxide to mimic the exact surface features of Mars.

During the preparations of the presentation, Aung came to the sudden realization that it would not be possible to control the vehicle remotely from the Earth due to the sheer distance between the two planets. This distance would result in a data transfer delay between the NASA team on earth and the helicopter of over 15 minutes. To correct this issue, it was decided that a small onboard microprocessor computer would have to be developed and attached to the aircraft to provide it with flight instructions and control its movement.

Aung explains that the central issue related to the speed with which the helicopter could respond to perturbation. Since Ingenuity could face extremely quick changes in wind speed as well as pressure, it would have been extremely difficult to maintain flight stability in the absence of real-time control.

Despite the daunting nature of this obstacle, Aung fully understands that it was a problem that her team could solve if they put all of their minds together. Aung immediately recognized, due to her background as an electrical engineer with a specialization in autonomous technologies, knew that it was entirely within the realm of possibility to construct a small microprocessor that could control the helicopter.

It was a very difficult process convincing NASA's top leadership, but ultimately Aung and her team were successful. The prototype first began a series of tests in the year 2016 which began withholding the helicopter in place in a vacuum chamber. The data from this experiment, such as the torque of the vehicle proved decisive in terms of making further developments.

When the prototype unit was held stationary, there was an interaction between its rotors, the ground, and the test stand. This interaction produced a series of intricate vibrations that affected the device's control systems and lead to it being torn apart completely upon take-off. This same effect has been observed amongst many full-sized helicopters during take-off as well.

Aung explained that if the team failed to produce a stable prototype that could remain intact during the flight process, the entire project would have been canceled. And that perhaps the possibility of making the world's first helicopter flight on Mars would have been delayed by several years. This would especially have been a problem since Perseverance would have been launched to mars regardless of whether or not a prototype helicopter could be prepared.

On the 29th of April, 2020 NASA finally prepared the rover Perseverance to host Ingenuity after successful testing of the helicopter had been accomplished. After much testing and some serious mathematical work, the prototype not only flew but also hovered, turned in multiple directions, and landed safely at the bottom of the vacuum chamber. This demonstrated not only that a working helicopter could hover on the Martian surface, but also that it could successfully be landed safely back on the ground as well.

Additional challenges faced by the NASA helicopter team included the extremely low gravity on Mars when compared with that of Earth. The team could alter the atmospheric pressure in the vacuum chamber to simulate the atmosphere of Mars, but it was not possible to replicate the gravity of Mars, so they utilized a gravity offload system to mimic the effects of low gravity by as much as possible.

A second prototype then underwent extensive environmental testing to determine its feasibility for flight in the Martian atmosphere. By the start of the year, 2019 NASA's team had finally finished constructing Ingenuity and prepared it for space travel after two separate tests in a vacuum chamber that confirmed the workability of the craft.

Now that they've successfully landed the first controlled helicopter flight on Mars, the team at NASA now speculates about future possibilities. They foresee possibly hundreds of helicopters to the Martian surface to conduct extensive analyses of the planet's surface and mineral composition.

The team at NASA's JPL has already begun work on building a second, much larger helicopter that could be flown to the surface of Mars for even longer and more impressive heights. These helicopters could be used to scout over difficult territories such as deep canyons and inhospitable mountains. Aung even expects that in the near future it will become a norm to send such aircraft to the surface of Mars. With their advanced technology and machine brains, helicopters can traverse massive distances over a very short time.  After all, Aung notes, wherever a plant has an atmosphere it is possible for controlled flight to be accomplished.

From ancient times humans have divided themselves on the basis of physical appearance and behavioral traits, this discrimination leads to division among people giving superiority to one race or gender over another
601 views

What Would Happen If the Earth Started Spinning Faster

With so much going on in our lives to worry about, the probability of the earth spinning faster than the normal speed is not something that we should be concerned about much as it is unlikely to happen
510 views

The first skyscraper was actually built in Chicago in the United States of America. It was the ‘Home Insurance Building’ built in the year 1884-1885
318 views
Continue Reading