Have you ever passed through or been at a gas station and you realized there is a crowd gathering around? Your first thought would be that there is an argument taking place but what if you move close to take a peek and realize the crowd has gathered to look at an unusual flower? Seeing a crowd at an abandoned gas station is shocking and would cause anyone to become a curious cat.

This week, in Alameda, Solomon Leyva took a giant flower to the Bay Area’s abandoned gas station so people could admire its beauty. It is reported that the said flower takes years to grow up but its life lasts merely a few days. A Titan Arum, also known as the Corpse Flower, is a rare flower that takes between 5 to 20 years to grow, clearly not an impatient person’s cup of tea. 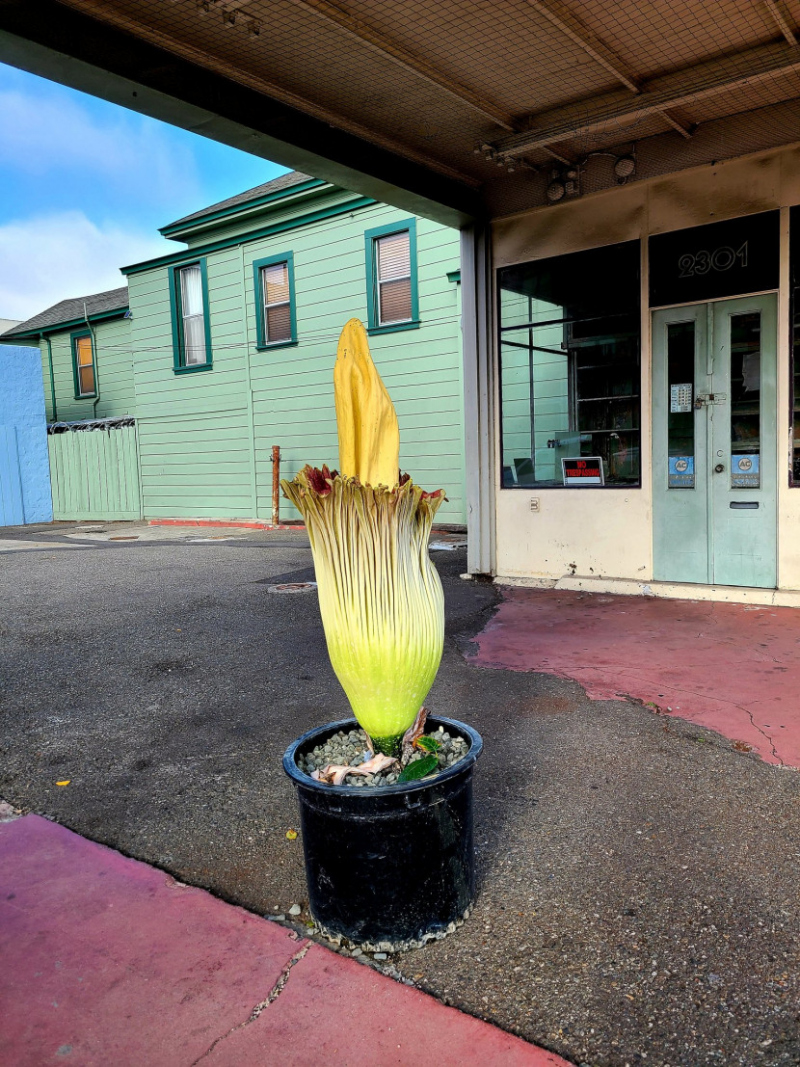 The corpse flower can grow up to 15 feet and as mentioned before lives a very short life. It is rarely found in nurseries or gardens as it takes a long time to get the results. The San Francisco Conservatory of Flowers is one of those few places with this flower in their greenhouse that is open to the public.

In 2020, when this flower had fully grown and was blooming the conservatory extended the time so that most people could visit and take a look at the flower. Imagine the crowd that would have gathered at the gas station when Solomon Leyva, the owner of the nursery brought this flower for people to see.

The smell of the flower is described as “funky” and can be spotted from a mile away which gives the sense that it is strong and detectable from some distance. The reason why titan arum is also known as a corpse flower is that its smell is similar to that of rotting meat which is unbearable for most people.

Just like rotting meat, the flower also attracts insects that are found on spoiled meat as similar smells attract similar creatures. There are only about 1000 corpse flowers out in the wild because it takes a long time to bloom, leaves a strong stench, and does not exactly tick boxes to plant in a house garden or a park.

The flower tuber is planted 1 to 15 feet deep depending on whether the tuber is small or big. As a beginner, it is best to not grow this plant in your home because of the smell and the lack of experience. Furthermore, you will not be able to see the results for a very long time and may remove them before it blossoms.

Unless you have an outdoor garden and have the patience to wait for its blossom and die within a few days, you can grow it out of curiosity but it serves no other purpose. You can visit places like the San Francisco Conservatory of Flowers where they have this flower and it is about to bloom or is blowing at the moment.

Carl had the remains of Elena's body, and to confirm that, Elena's sister went to Carl's house and peeked through the window. She saw Carl dancing with Elena's dead body that hardly traumatized her
731 views

Angel Lust, also known as the Death Erection, is a common post-mortem condition in men executed, specifically by hanging. Whether those men die because they were executed or because they committed suicide, the presence of the erection is regular
863 views

A new ear of human history has been unleashed through the lift-off of a small helicopter, named Ingenuity, on the Martian surface. This event marks human's first official vehicular flight on a planet other than Earth
294 views
Continue Reading